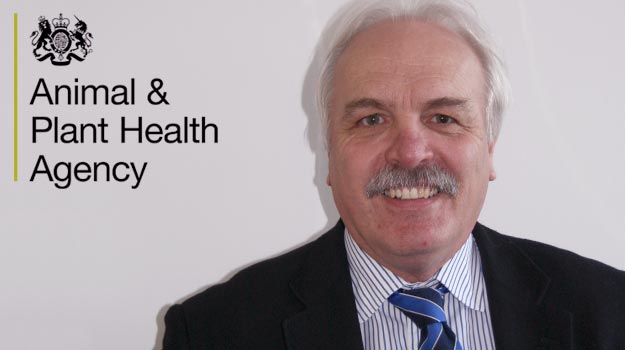 The Animal and Plant Health Agency (APHA) employs more than 340 vets who perform a multitude of roles – from helping to prevent and control notifiable and reportable disease, to monitoring welfare standards and shaping government policies.

David Collins is the veterinary head of field delivery in the APHA’s England western area. In this article, we speak to David about his role and the path that led him to where he is now.

Tell us a bit about your background – what made you decide to be a vet and what was your first veterinary job?

I was born in Ebbw Vale in South Wales, moving to Port Talbot as my father and other members of my family worked in the steel industry. From an early age I wanted to become a vet, which was going against the norm within the family as we didn't have any ties to agriculture.

As a result of this goal, my education was science-based and I went to the RVC in 1970, qualifying in April 1975. On leaving college I became an assistant in a mixed practice in south-east Cornwall, then a salaried partner and, finally, partner in the same practice.

What made you decide to apply for a job as a vet in the APHA?

The partnership was not working out so, in 1983, I decided to look for a veterinary job that wouldn't involve me joining another practice and starting again.

I saw an advert for veterinary officers (VOs) in the State Veterinary Service (SVS) and decided the role looked challenging, with a good salary and other benefits, and had none of the drawbacks of practice. I duly applied and started my career in the SVS in April 1983, as a VO based in Oxford.

How long have you worked for the APHA?

I have worked in state veterinary medicine for more than 33 years, during which I have had various roles in a variety of locations.

I moved from Oxford back to Cornwall in 1984 as a VO, where my work changed from dealing with the Pig Health Scheme to becoming involved in bovine TB control. Then, following a change in my personal life, I moved on promotion to senior VO to Tolworth in Surrey, working with a meat hygiene policy team.

I managed the national surveillance scheme for residues, working with colleagues in the Central Veterinary Laboratory’s biochemistry department and the Veterinary Medicines Directorate (VMD). During this time I was involved in discussions on EU directives on residues. I attended and gave presentations at international residue conferences in the Netherlands, Belgium and Ireland.

When the BSE crisis hit in 1996, I took on the work of the "Over Thirty Months" and "Calf Processing" schemes – industry support schemes that meant  working with the Intervention Board. I was also trained as an accredited lead assessor and started auditing the Meat Hygiene Service.

An interesting aspect of my work in Tolworth was the foreign inspection visits carried out under Imported Food Regulations which, at that point, had not passed to the EU Commission.

I was fortunate enough to visit and conduct inspections of meat premises in Mauritius, Kenya, Zimbabwe, China (three times) and Singapore. I have also visited Cyprus, Korea, Germany and Portugal during my state veterinary career.

Following my stint in Tolworth, I was promoted to divisional veterinary manager (DVM) Cardiff in 1998, followed by lead DVM for the south-west, based in Truro. These operational roles involved managing the delivery of service by veterinary and technical teams to farms and other premises.

I continued working in Cornwall through successive spells of organisational change. In 2012 I became regional veterinary lead for the south-west and I am now veterinary head of field delivery, England western.

What is your current role?

As veterinary head of field delivery, I provide strategic veterinary leadership to teams of vets and techs delivering APHA operations in the England western delivery area. I also have responsibilities for clinical governance and quality assurance of APHA staff and for audit of its veterinary subcontractors.

I act as the senior representative on strategic boards at national meetings of the APHA and its stakeholders, as well as liaising with operational partners and stakeholders within the region.

Every day is different. So far today I have dealt with:

Tomorrow will be different, but the majority of my work will be dealing with bovine TB and related issues.

What do you like best about being a Government vet?

What I enjoy most is working with a dedicated team of staff (vets, techs and admin) to deliver the APHA’s work. Our people are our greatest asset and I am really fortunate to work alongside a very diverse team, and over the years I have made a very good network of friends within the agency.

What’s the biggest lesson you have learned in your career to date?

Like a lot of colleagues, I learned some of my biggest lessons during the foot-and-mouth outbreak in 2001 when, as DVM Cardiff, I had to work not only with Defra, but Welsh Assembly Government. This was a very good lesson in what devolution meant, because the Welsh Government was keen to influence and manage the way we dealt with some aspects of controlling the disease.

What makes you proud to work for the APHA?

As I have already said, the people I work with and alongside in the APHA.

Our people are highly skilled, professional and dedicated, and these strengths are best illustrated when we deal with a notifiable disease outbreak. Whether they be big or small, everybody works with one single purpose: to eradicate the disease and bring back normality.

What has been your biggest achievement and/or greatest challenge?

My biggest achievement was my involvement in drafting two EU directives. I was involved both as a national expert and private expert, taking part in the EU council and expert group meetings that led to the directives becoming part of EU law in 1996. This was followed by implementing the directives into UK legislation and writing the APHA’s operating instructions.