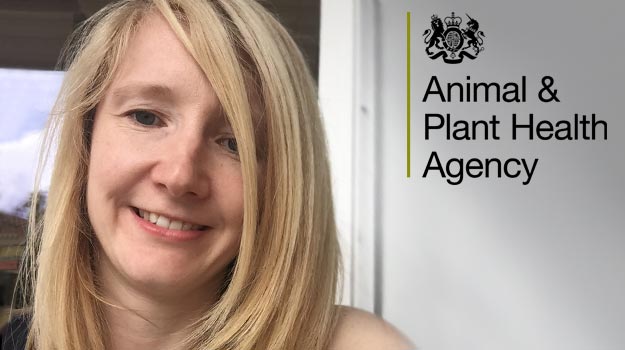 The Animal and Plant Health Agency (APHA) employs more than 340 vets who perform a multitude of roles – from helping to prevent and control notifiable and reportable disease, to monitoring welfare standards and shaping government policies.

Anne-Marie McDowall is a senior veterinary inspector for the APHA based in Scotland. In this article, we speak to Anne-Marie about her role and the path that led her to where she is now.

Tell us a bit about your background – what made you decide to be a vet and what was your first veterinary job?

Growing up, I always knew I wanted to be a vet. A desire to work in a job varied enough to keep me interested, coupled with the desire to work with animals, made this an obvious choice. An added bonus was the challenge of getting into vet school, as in those days getting a place was tough.

After qualifying in 2000, my first job was at a small animal clinic in Glasgow where I had seen practice during a lot of my placements.

What made you decide to apply for a job as a vet in the APHA?

After working in both mixed and small animal practices for 12 years, I was bored with standard clinical work. I did a master's in veterinary public health (MVPH) at the University of Glasgow in 2010 and enjoyed this, so looked for a role where I could use this more.

Due to a particular interest in rabies, my dissertation involved looking at the “Risks and consequences of rabies re-introduction to the UK with potential harmonisation of EU pet travel policy” prior to the changes in EU legislation in 2012.

I found the consideration of how EU policy impacts on the UK and the balance of risks (public and animal health) with trade very engaging, which encouraged me to seek the opportunity to further this interest.

Joining the APHA seemed the obvious choice, with its huge responsibility in regulating imports and exports of animals and animal products.

In addition, starting a family meant – after working many years of bank holidays, Christmases and weekends – the flexible working offered by the APHA was very attractive.

How long have you worked for the APHA?

What is your current role?

My current role is that of a senior veterinary inspector. I undertake routine field work on behalf of the Inverurie team, which can include:

In addition, I have a coordinating role in Scotland for border controls. This means I have to work with colleagues to guide them in this area of work, which includes imports of pets, livestock and animal products/ABP.

I have the opportunity to liaise with Scottish Government to direct policy decisions and work closely with airports, the UK Border Force and local authorities to help protect the UK from the threat of exotic disease. I am often involved in training, be it APHA staff, local authority officers, customs officers, pets checkers or official veterinarians (OVs).

I am also an ambassador for the APHA, working with the vet schools to encourage new enthusiastic young vets to consider the agency as a future career.

One of the great things about my job is that it is so varied.

Often I will start in the office, responding to emails and giving guidance as necessary. I get a lot of phone calls regarding animals imported incorrectly, which may be considered a disease risk, and I help risk assess the need for quarantine.

This month I’ve travelled quite a lot to various meetings, including two at airports and one at a seaport. Some days I will spend the whole day visiting farms and inspecting their livestock due to welfare complaints.

What do you like best about being a Government vet?

The variety and the opportunity to get involved with policy making – being able to make a difference.

What’s the biggest lesson you have learned in your career to date?

Always deal with problems as soon as possible, don’t take the ostrich approach.

What makes you proud to work for the APHA?

I am proud to work for an agency that sees the importance of maintaining a balance between home and work life.

Being a vet has been a lifelong goal and so is very important to me, but I found, working in practice, the job can start to take over your life. The flexible working approach of the APHA is invaluable in allowing me to give proper time to my family and I, as well as to my job.

What has been your biggest achievement and/or greatest challenge?

My biggest achievement has been to gain my MVPH, and I very much enjoyed the opportunity to learn again.

Joining the APHA has meant I can continue to learn on an ongoing basis, due to its encouragement of further training – I attended the poultry health course run by The University of Nottingham and Pirbright Institute in 2014, and get regular training on a variety of subjects.